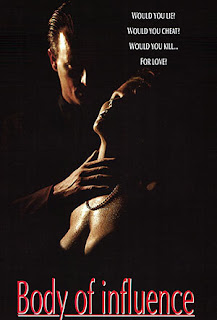 While assisting his detective friend map out a psychological profile of a serial killer, Jonathan Brooks (Nick Cassavetes), a successful psychologist set to be married meets a new patient, Laura (Shannon Whirry), an amnesiac with a lifetimes worth of sexual repression claiming to suffer reoccurring violent, sexual nightmares. Entering his office one day, he finds Laura, though her demeanor has changed from that of frigid repression to liberated exhibitionism, propositioning Johnathan and claiming her name is Lana. A clear case of split personality, Jonathan's attempts to cure Laura prove futile as the seductive Lana finally breaks Johnathan's moral code, ending his engagement and leading him down a professionally unethical and potentially deadly path.

Opening with a voice-over montage of Johnathan's patients spilling their sexual neurosis, mostly as it relates to men, Dark lets his intentions known from the outset. With Body of Influence, Dark does a bit of a swerve by hinting at one of his rare male-centric narratives ala Night Rhythms (1992) or Secret Games 2 (1993) by having the set-up of the film revolve around Johnathan, though as soon as Laura/Lana enter the picture, the force of nature that is Shannon Whirry takes over, wrapping everyone around her finger. Whirry is truly exceptional here. Much like she does in Mirror Images II (1993), Whirry not only effortlessly balances two drastically different personalty types but excels at playing both, particularly the immoral Lana. Nick Cassavetes (son of John) makes for a pretty interesting foil for Whirry with his classic 40's Hollywood look (and hair). Very noir, slightly gangster with a barely contained sinister urge, which makes his casting as a psychologist curious yet also perfect considering some of the paths taken by the film, Dark once again reflecting the general adult populations inability to deal with its own sexual hang-up's, even those who supposedly understand them. Dark also fuses psychology with the voyeurism found in all of his erotic thrillers by having Johnathan videotape his sessions with his patients, which spectacularly backfires on him in a wonderfully tense but awkwardly hilarious moment. Grim as the film might seem, it is incredibly gleeful in its perversity, Cassavetes going all in once under Whirry's body of influence.

Although she continued to appear in direct-to-video films, 1993 was the final year Whirry worked with Dark, who took credit for putting Whirry on the map. Dark told Psychotronic Video in 1997 “I pretty much discovered Shannon Whirry. It was during a casting call where she just walked into the office. She'd done a couple of scenes in Out for Justice where she played a waitress, and they were really pretty good scenes.” He would go on to lament her career choices as the 90's progressed saying “Unfortunately, Shannon Whirry's management has decided that this is not the image she should be promoting... Now she doesn't do any more nudity.” Casavetes, who already had a few erotic thrillers to his name before Body of Influence, also left the genre after working with Dark again in Sins of the Night (1993), following in his fathers footsteps and becoming a director in 1996. His most high-profile title is, of all things, the favorite of high school girls everywhere, The Notebook (2004). About as far removed from the likes of Body of Influence and Sins of the Night as possible, though ironically the same could be said of Dark's later music videos for the likes of Britney Spears and Mandy Moore. Nevertheless, Body of Influence stands alongside Animal Instincts 2 as the peak of Dark's erotic thrillers and a perfectly perverse antidote to impotent modern sensibilities.