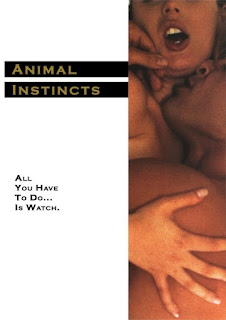 The first Animal Instincts film was not only Shannon Whirry's first film with Dark but it was her first erotic thriller, taking center stage as Joanna Cole who's marriage has lost it's romantic spark after her husband's job as a police officer consumes all his time and energy. Coming home early one afternoon, David catches Joanna in bed with the TV repairman, though his reaction is not one of anger, but of lust. Upon the realization of David's voyeuristic tendencies, their marriage is reinvigorated with Joanna entertaining a guest each evening while David watches via video feed in a nearby room. Their operation soon takes a turn for the dangerous when a rough client turns out to be the henchman for Lamberti (David Carradine), the gangster owner of a local strip club with a score to settle with David which threatens to expose everybody involved.

Whirry, who by 1994 had become Dark's main softcore muse, returned as a different iteration of Joanna Cole in Animal Instincts 2. This Joanna is a recent divorcee who in an attempt to start anew buys an expensive house in fairly well-off suburban residential area. Joanna instantly catches the eye her neighbor Steve (Woody Brown), a security contractor with a habit of installing hidden cameras in his client's bedrooms. He sneaks a camera in Joanna's air vent, though a hasty job results in Joanna discovering it. Much to Steve's surprise, Joanna makes herself known to him through the camera and begins putting on nightly shows, bringing home various men while Steve watches from his garage. When a guest gets rough, Steve rushes over in Joanna's defense. The dynamic is forever altered and Joanna, who soon enters into a relationship with her photographer boss Eric, tells Steve it's over. Already on edge and dissatisfied with his marriage, Steve becomes obsessive and begins to pose a threat to Joanna and anyone around her. 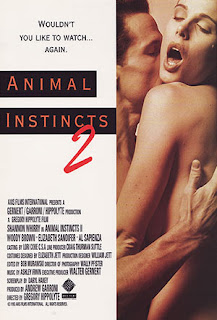 One of the best films in Dark's entire oeuvre, there's a strong case to be made for Animal Instincts 2 being the pinnacle of direct-to-video erotic thrillers. Dark was always head-and-shoulders above the competition but Animal Instincts 2 feels like the perfect realization of all the ideas that dominated his softcore work. Like the first film, there's somewhat of an irony to that because, one, it's a sequel, but also Dark is once again playing around with convention, making Whirry a single divorcee and giving the put upon housewife role to the antagonists wife. Unlike the first film however, Animal Instincts 2 is a full-on thriller, bordering on psycho horror at points thanks to the brilliantly threatening Brown, one of the genres finest heavy's, outdoing his own similar on-the-verge of boiling over performance for Dark the same year in Secret Games 3, essentially a two versions of the same type of character. Dark is also back in his usual state of mind on the subject of marriage, giving Brown some memorably acidic dialogue in a spiteful monologue on the idea of suburban perfection, leaving room for the excellent line “You have no idea how bad I want to be”. Dark is also back to his typical self when it comes to the consequences of unchecked desire. In sharp contrast to the first film where voyeurism leads to new life being breathed into a fading relationship, here what begins as risky fun quickly becomes more and more twisted, leaving no room for happy resolutions.

By 1996, Dark was entering a new phase of his career and took a radically different approach to Animal Instincts: The Seductress. The voyeurism theme remained, however Joanna Cole became “Joanna Coles” and was played by Wendy Schumacher instead of Shannon Whirry. The interview cutaway segments also remained, but this time around Dark added a second narrator, record producer and expert knife-thrower Alex Savage. Despite having perfect vision, Alex has managed to fool everyone around him into thinking he's blind, his “blindness” giving him license to indulge in his voyeuristic fantasies. Joanna, an exhibitionist author who writes all about her sexual escapades, catches Alex's attention and the two join forces with Alex, keeping up his blindness ruse, creating situations where Joanna can act out and “perform” for Alex. 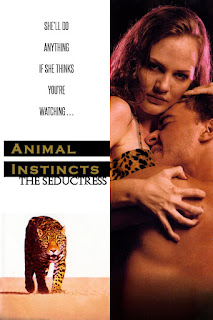 The last of Dark's softcore films, The Seductress is a weird outlier for both the Animal Instincts series and Dark's softcore work as a whole. For starters, it's a stretch referring to it as an “erotic thriller” as it's really not a thriller at all. Somewhat like the first film, the thriller aspects of the story don't kick in until the film's final third and even then it's regulated to one particular segment which Dark turns sardonically hilarious thanks to a deliberately over-the-top gangsta rapper named Stone Chill. For the most part, The Seductress plays out like an avant-garde erotic drama, Dark putting another twist to the narration wraparound by adding a second talking head, but its look and tone are what really make the film unique among Dark's softcore films. Dark had always purposefully kept his hardcore and softcore films aesthetically different. On occasion such as in Secret Games or Mirror Images (1992), Dark would inject a dose of surrealism though it was noticeably different from the kind found in his adult films. While not as radical or inaccessible as the likes of Snake Pit (1996) or Shocking Truth (1996), The Seductress does feel more in-line with Dark's hardcore work, loaded with brief cutaway edits featuring a nude Schumacher in a variety of poses holding knives reminiscent of the sadomasochistic flashes Alain Robbe-Grillet peppered his films with. The sets and backgrounds during these moments even appear to be the same Dark used in Flesh, a hardcore feature Dark made the same year.

Dark admitted by the time he got to The Seductress he had grown sick of the genre. Dark told Psychotronic Video in 1997 “I really didn't want to do the film from the girls point of view, but the company wanted to. I mean, the idea of some blind guy who's not really blind, that's funny. But the idea of a girl who likes being an exhibitionist... who cares? We've seen it a thousand times. I've shot it a thousand times. But a blind guy pretending he's blind to get away with checkin' shit out, now that's interesting.” Dark was also vocal about a lack of creative control in softcore saying “...I'm not going to make a remake of a movie I've already done. If that's what you want, I'm not interested... It's just endlessly tiring. Besides, I'm really not much interested in making softcore films anymore. I'm more interested in the underbelly of the human mind.” He certainly followed through on statements like that with the previously mentioned Snake Pit and Shocking Truth, though it's also somewhat of a curious statement given most of Dark's softcore work is built around the underbelly of the human mind. Nevertheless, The Seductress made for a fascinating swansong to the erotic thriller and the Animal Instincts series for Dark while the first two stand as the most distinguished representatives of a sadly moribund type of filmmaking.