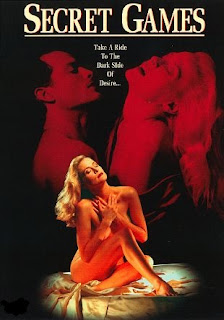 
Despite living a leisurely life, Julianne Langford as grown increasingly frustrated with her husband Mark (Billy Drago) paying more attention to his cushy job than her. Following the advice of her friend Sandy, Julianne introduces Sandy to Celeste (Delia Sheppard), a madame for high class escorts operating out of a lavish mansion who informs Julianne that she can be anything and anyone she wants to be should she join Sandy and the other girls under Celeste's wing. Reluctant at first, Julianne eventually indulges herself, giving herself the name “Arianna” and soon meets Eric (Martin Hewitt), one of Celeste's biggest spenders. In spite of the Celeste's warnings to never become attached, Julianne becomes smitten, and Eric seems to be as well, returning numerous times to see Julianne, though the fairytale soon turns dark when Eric reveals his possessive nature and his intent to keep Julianne all to himself, preparing to take out anyone who becomes an obstacle.

When the time came for a Secret Games sequel, Dark carried over the prostitution theme, but the film itself was wildly different from the first, focusing not on a bored housewife but rather a husband, Kyle Lake (Hewitt), an ex-critic turned out-of-work performance artist who's sex life with his professor wife Heather has long lost whatever spark it once had. While Heather goes out of town, Kyle calls an escort service and after meeting high-end call girl Stacey, Kyle quickly begins to fall in love with her, but also begins an affair with Irene, a potential home-buyer interested in buying Kyle's house. Falling harder for Stacey and trying to dissuade Irene's romantic intentions, Kyle documents his thoughts on video, breaking the fourth wall and delivering monologues to the camera, musing on the concepts of love and sex. 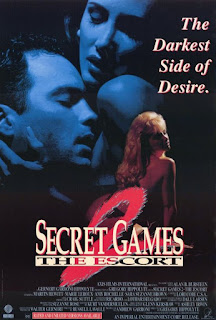 When Dark turned the series into a trilogy, he returned to the first film for inspiration, essentially telling the same story with some additional tweaks and giving the louse husband a different job, a doctor this time around, Alex Larson, who's demanding job keeps him away from the new home he just bought with his wife Diana (Rochelle Swanson). Growing increasingly fed up with Alex canceling plans and outright neglecting her in general, Diana takes the advice of her new neighbor and accompanies her to the home of Ruthie, a high class madame. Like Julianne in the first film, Diana can't bring herself to go through with it at first, though eventually gives into temptation and soon becomes the favorite of Terrell (Woody Brown), one of Ruthie's highest paying, albeit most mysterious customers. Terrell's affections however soon cross the line as he begins to terrorize Dianna, making her his plaything in a twisted psyschosexual game and posing a threat to those around her. 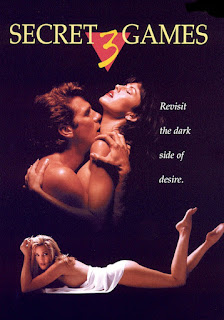 Despite the plot similarities with the first film, Secret Games 3 is actually a superior film in a few areas. This time around Dark puts the fractured marriage front and center, heightening the drama and tension once the film really kicks into thriller gear. The film also feels much more like a mean thriller than the first film thanks to the physicality of Woody Brown. While Martin Hewiett was brilliant as the villainous Eric in the first Secret Games, his approach was more laid back and low key. Very snakelike. Brown by contrast is brute force. It's not that Brown is all histrionics. Quite the opposite, in fact his calmer moments are some of his most chilling, it's just that his characters for Dark are always holding in years of rage and are always on the verge of exploding with violence. It's the same bottled up aggression Brown brought to his role in Animal Instincts 2, Dark's softcore magnum opus, the same year. Dark also gives Terrell a much more credibly dangerous background and the climax of the film is certainty some of Dark's most outright violent this side of his slasher film See No Evil (2006). Although Dark sets aside the surreal, Buñuel influenced religious based fantasy scenes from the first film, the two bookend bathtub scenes, along with being quintessential additions to any erotic thriller, do leave some things open to interpretation, a rather brilliant move by Dark at the last minute to further set the film apart from the original.

Dark himself was open about the Belle de Jour influence. Speaking to Psychotronic Video in 1997, Dark described the first Secret Games as “Sort of a Belle de Jour, that's what it was based on, more or less. A little surreal, it was sort of a cross between Belle de Jour, Emmanuelle and a Chanel commercial”. Dark again mentioned Buñuel's film in his excellent Rialto Report interview, even mentioning the giant Spanish poster for the film he has hanging in his living room. The first film is also notable in Dark's erotic thriller cycle for being the first Dark softcore film to feature former Penthouse pet Delia Sheppard who would take the lead in Mirror Images, play a critical role in Dark's Night Rhythms (1992) and appear once again in Animal Instincts. In the same Psychotronic piece, Dark opined on Secret Games 2 saying “There's a great deal of menace in that film... I looked at the film about a month ago, and quite honestly, I think it's a lot more interesting than most of the stuff put out by folks doing this shit.” Indeed, and in truth the same could be said of the entire trilogy which is why all three stood out in their day and over 20 years later still stand as an example of how higher a caliber Dark's softcore works were in the grand scheme of 90's erotica.